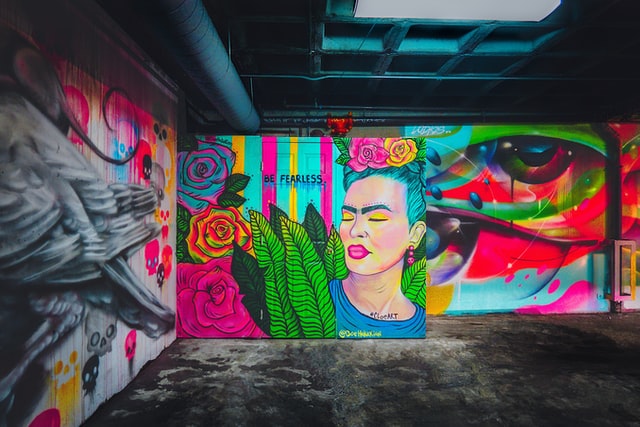 The Pop Art movement began in the United States in the mid-1950s and was led by revolutionary modern artists Andy Warhol, James Rosenquist, and Roy Lichtenstein. These artists created an international phenomenon with their art, as there were no such art movements at that time.

The movement quickly spilled across the pond to us in Europe, whereby European Pop Art was very different from American Pop Art. Artists from Europe could only observe the Pop Art works of their great idols from a distance and thus only use them as elusive inspiration.

Pop artists wanted to move away from the subjects traditionally covered by the visual arts, such as morality, classical history, religion, and myths. Although they valued the visual arts, they could not establish any concrete connection between it and real life. They wanted to fill that void and create art that was connected on a personal level to the people of the time.

Her goal was to explore her everyday environment:  everyday objects, people and things stimulated her imagination. They dreamed of highlighting pop culture in society and establishing it in it. Artists of the Pop Art movement drew their inspiration from films, advertising, packaging, pop music, comic books and current topics.

The reaction of art critics against this artistic movement was that the works looked like ready-made and lacked artistic style. But they had style: Pop Art style and this spread rapidly in Europe thanks to famous artists like Warhol.

We are joined by Tysen Knight, an African-American contemporary artist with keen focus on street art and urban expressionism. Knight’s medium is the very best of paints, colors, and materials to create stunning street art depicting the aesthetics and styles of Pop Art. Knight is an avid follower of Warhol’s work, and believes seeking tremendous inspiration from him.

Knight shares key characteristics that make up the pop art movement. He introduces different its principles and in-depth information on its origin:

The Pop Art movement challenged the visual arts of the past, but had great respect for it. Pop artists hoped to connect the visual arts with the mass-produced culture of the time.

Comments on 10 Characteristics and Ideas of the Pop Art Movement

The International Yachting Media , called Tuttobarche.it in its Italian version, is not only the most widely read...

Where are Antique Paintings for Sale in US?

If you have an interest in collecting antique paintings, but are not sure where to begin, consider participating...

DESCRIPTION: Priligy pill could be a drugs that's wont to treat ejaculation in men of between eighteen and sixty...

How can you take advantage of HBO Max?