Back in 2004, Facebook launched its first MVP (Minimum Viable Product). The first version, named ‘The Facebook’, was only accessible by the students of Harvard University.  Soon after, the MVP gained momentum and other notable universities urged to use ‘The Facebook’ for socializing purposes. With an exponential rise in Facebook’s popularity worldwide, several technology startups now prefer to develop MVPs to test their business ideas.

Eric Ries, renowned author of the book “The Lean Startup”, describes MVP as the core component of the ‘Build-Measure-Learn’ feedback loop. He suggests, “The first step is identifying the problem to be solved and thereby developing an MVP to begin the learning process.” Today, more and more businesses and providers of user experience design services are inclined to initiate UX designs with appropriate MVPs.

This blog post explores the concept and significance of an MVP with regards to digital product designs.

Understanding MVP and its Origin

A Minimum Viable Product or MVP is the simplest version of a project’s final product. It does not comprise of all the features but only the bare minimum required to complete the final task.

The term ‘Minimum Viable Product’ was coined by Frank Robinson in 2001. Since then, leading 21st-century start-ups including Twitter, Dropbox, and Zappos pre-launched MVPs to test their products’ customer demand and usability. 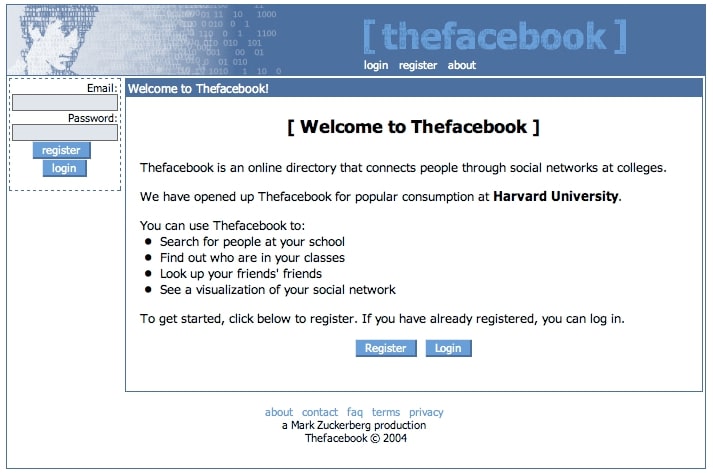 An MVP is ideally produced before the design and development phase of a product. It enables decision-makers to measure customer responses to their products and assess their long-term viability. MVPs are largely used by start-ups to demonstrate their ideas and capabilities to clients by investing minimum resources and time.

However, other factors such as market research and ROI analysis also contribute to the development of MVP. Prior research combined with an MVP ensures that a business is on the path to achieving customer satisfaction with the right solution. For this reason, MVP is often considered as an essential element of UX research services for lean start-ups.

Significance of Building a Minimum Viable Product for Digital products

An MVP only incorporates the core operations or functions of the final product. The minimum design features do not include any element to enhance customer engagement or experience. It is, therefore, way economical to build MVP that demands minimum resources, efforts, time, and investment.

For instance, Twitter was invented by Odeo, a podcast company, to facilitate instant messaging among a small group of employees. Initially, Twitter focused on strengthening the SMS services within 140 characters and left out a majority of its current features. The original Twitter or “Twttr” account appeared as below- 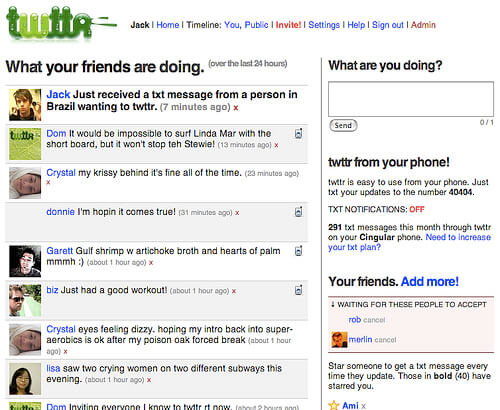 Instead of developing a full-blown version, Twitter initially tested the platform’s usability and demand amongst Odeo itself. It enabled the founders to estimate the credibility and future ROI of their idea with minimum investment.

An MVP enables a project’s user research consultants to extract rich insights about the product’s target audiences and their needs. The limited but real user base provides rea-time feedback necessary to gauge a product’s future growth. Customer feedback becomes a key factor in analyzing user needs, motivations, expectations, and preferences. Also, it informs the design team about how to enhance the product’s UI and UX for maximum user adoption and ROI.

MVP- Buildïng a slice across

Although MVP works as a great booster for lean start-ups, the idea seems impractical and unnecessary for large organizations. Experts at NN Group suggest,

“MVP is counter-productive for large organizations. It is because the goal is to have great software in the end and not to prove something every two weeks.”

Sure, MVP seems to be a laborious and ineffective idea for dynamic businesses. However, today UX designers and providers of UX research services are experimenting with different techniques to transform the traditional MVP.

Jussi Pasanen, an Australian digital designer, shares a fresh approach towards ideating and building an MVP. 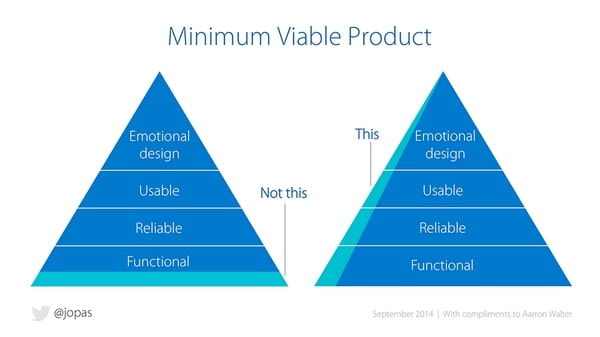 Jussi suggests that for ensuring an early-stage quality experience, designers should “build a slice across, instead of one layer at a time.”

MVP is an effective methodology for start-ups to test the viability of their business idea. Its long term benefits for bringing innovative ideas to life outweigh the risk of failure involved in the design process. In a nutshell, Eric Ries summarizes the benefits of an MVP in his following quote,

“The minimum viable product is that version of a new product which allows a team to collect the maximum amount of validated learning about customers with the least effort.”

Oodles is creative UI UX Design Studio conduct in-depth research to fulfill the digital requirements of a variety of businesses across the globe. Our UX research service deliverables include User Persona Generation, Competitive Analysis Reports, Information Architecture Diagrams, and other UX reports. Talk to our UX/UI design team to build intuitive and effective digital interfaces for your business.

Jomes
I spoiled a dozen of drafts and cracked my head for more than two hours, wondering how to do this research the right way. Then I submitted my order at Essayonlineservice website. The writer completed the draft very quickly. I should say that the work exceeded all my expectations. I will stay their loyal customer in future.

Jomes
I spoiled a dozen of drafts and cracked my head for more than two hours, wondering how to do this research the right way. Then I submitted my order at Essayonlineservice website. The writer completed the draft very quickly. I should say that the work exceeded all my expectations. I will stay their loyal customer in future.
Fonolive.com, Fastest Growing Free Local & Social Classifieds
Fonolive.com, #1 Free Social Classifieds

How to stop leakage of protein from the kidney naturally?

Protein leakage is one of the serious kidney-related disorders. Usually, protein leaks into the urine, but when...

It was very important and highly recommended by all the dentist around the world to maintain good oral health. The...

Your sitting down position has got a significant effect on your health, so it is worth it to invest in a chair...

Top Best and most popular Shoe brands in India

Best Shoe Brands In India All of us know how important it is to select a shoe that fits right and feels...